How to create a PHP package. Part 2: PHPUnit

This is the second part of a series on creating a PHP package.

In the previous part, we initialized a project using the composer and wrote the code itself. In this part, we will integrate the PHPUnit into our project and write tests.

Code should be covered with tests. This will help to avoid bugs when modifying the code. When we connect the CI to the repository, tests will run automatically as pull requests are created.

Let's add PHPUnit to our project as a dev dependency. To do this, run in the console:

Note that we specified --dev option. This means that we want to include itin as a dev dependency.

Dev dependencies only needed during development and not needed in production.

In production, we will install dependencies with --no-dev option that prevents dev dependencies from being installed.

A new dependency will appear in the composer.json file:

After executing the command, the composer will also create another composer.lock file.

What are the differences between composer.json and composer.lock files?

When dependencies are installed, the current versions of libraries are written to the composer.lock file.

When we runcomposer install, we will download the versions of the packages that are specified by composer.lock.

This allows keeping the same versions of dependencies across all servers and guarantees that the code deployed across the cluster will work the same.

Our tests will be located in the tests folder. We need to tell the composer to load these files, but only in the development environment. To do this after require-dev add another section:

Now let's write the tests themselves.

We can run each test from the console:

To run all tests at once, we need to create a configuration file.

To simplify the testing process and run all tests at once, let's create the phpunit.xml.dist configuration file at the root of the project.

Usually phpunit.xml.dist contains configurations, default values, and secrets that can't be shared or committed to the repository.
In production, we can override these values with the phpunit.xml file.

phpunit.xml. should be ignored by git and should not be committed to your repository. It may contain confidential information, such as database access.

It is similar to how Symfony overwrites the environment variable values ​​from the .env file using the .env.local file.

I will give a ready-made version of the file, but it can contain many settings.

See the documentation for details.

PHPUnit can also check how many tests are covered in your code. Programs with high test coverage have a lower chance of containing bugs than programs with low coverage.

The necessary settings are already in the XML file, but you also need to install Xdebug for PHP and enable xdebug.mode = coverage directive in php.ini.

Now brief information about code coverage is displayed in the console. 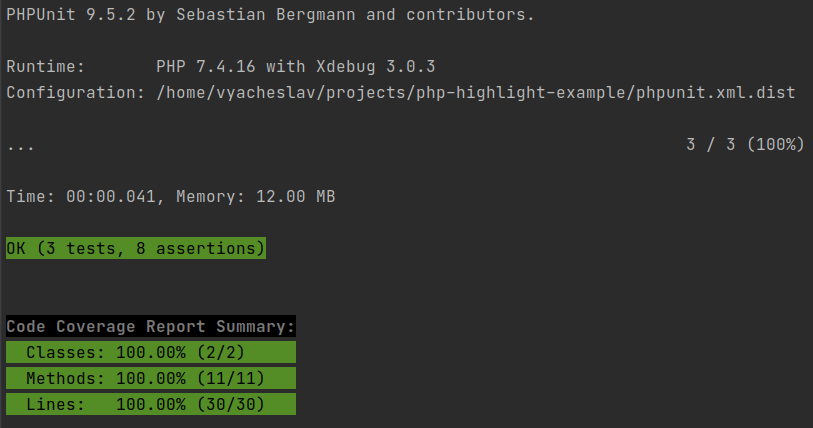 The report can also be generated in HTML form with a detailed description of classes and methods. To generate such report run the command

where report-html is the name of the folder where details will be saved.

This time we covered our code with tests. Next, we will integrate automatic code style validation.